When it comes to traditional Christmas Beverages nothing says Christmas like eggnog.

A rich sweetened dairy based beverage. Traditionally made with: milk, cream, sugar, whipped egg whites, and egg yolks. In some cases, brandy or rum are added to the drink.

Below is a family friendly recipe: 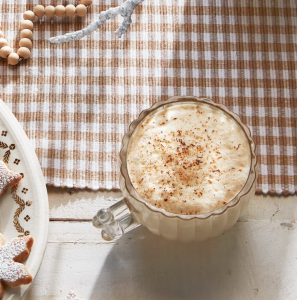 Yes! It’s a real thing. Click here for the recipe.

Posset, a hot milk drink that was curdled with wine or ale. Spices were added for flavour. Also used as a cold and flu remedy in the Middle Ages. Monks were known to drink a posset with eggs and figs.

Need drink coasters for your next batch of eggnog?