Anzac Day is one of Australia’s most important national commemorative occasions.

We have a standard generic ANZAC Day coaster available for private parties and functions to show your support or add your club, pub or restaurant logo to use in your own venue.

Did You Know:
* ANZAC is an abbreviation for Australian and New Zealand Army Corps.

* April 25, Anzac Day, was the day the Australian and New Zealand Army Corps landed on the Gallipoli Peninsula in 1915.

* ANZACs were all volunteers

* The ANZACs were on the Gallipoli Peninsula for only 8 months, where around 8,000 of them died.

* There is no town called “Gallipoli”. It is the name of an area.

* ANZAC Day was not a public holiday in Australia until 1921. However it was not observed uniformly in all the states. 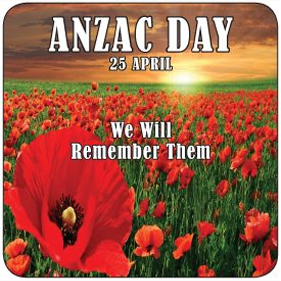